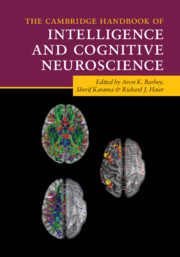 The Cambridge Handbook of Intelligence and Cognitive Neuroscience