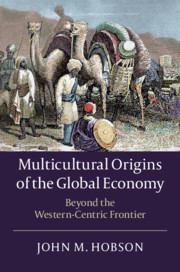 Multicultural Origins of the Global Economy
Beyond the Western-Centric Frontier