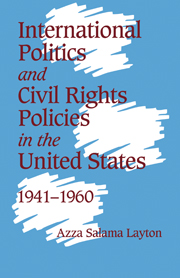 International Politics and Civil Rights Policies in the United States, 1941–1960