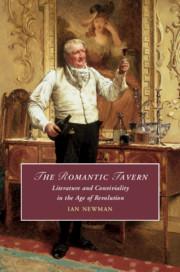 The Romantic Tavern
Literature and Conviviality in the Age of Revolution

Part of Cambridge Studies in Romanticism