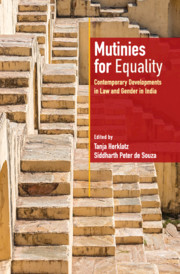 Mutinies for Equality
Contemporary Developments in Law and Gender in India