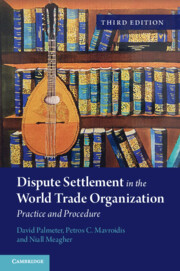 Dispute Settlement in the World Trade Organization
Practice and Procedure