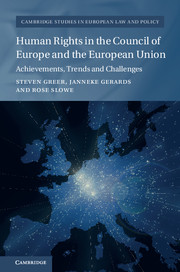 Human Rights in the Council of Europe and the European Union
Achievements, Trends and Challenges

Part of Cambridge Studies in European Law and Policy