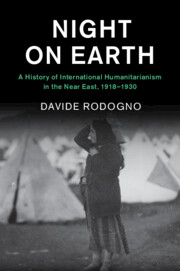 Night on Earth
A History of International Humanitarianism in the Near East, 1918–1930

Part of Human Rights in History