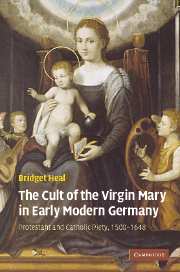 The Cult of the Virgin Mary in Early Modern Germany
Protestant and Catholic Piety, 1500–1648