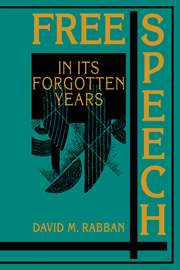 Part of Cambridge Historical Studies in American Law and Society