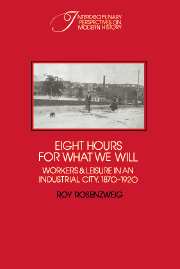 Eight Hours for What We Will
Workers and Leisure in an Industrial City, 1870–1920