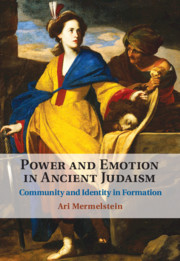 Power and Emotion in Ancient Judaism
Community and Identity in Formation

Find out more about Cambridge eBooks