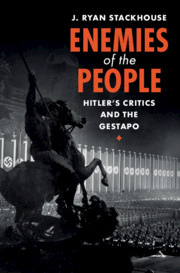 Enemies of the People
Hitler's Critics and the Gestapo