Information For The Media

Cambridge University Press has reported sales growth of 14 per cent with overall sales of £306 million in its latest 2016-17 Annual Report. Operating profit was £16.3 million, compared to last year’s equivalent figure of £6.5 million. The results reflect strong underlying growth of 5 per cent boosted by favourable movements in foreign exchange rates.

A focus on the changing needs of customers is at the heart of the Press’s strategy, supported by continued heavy investment in digital products, which now account for 36 per cent of sales.

A key highlight from the year has been the launch of Cambridge Core, the Press’s new platform that brings together academic books and journals in one single online home, which has seen over 18.5 million downloads.  The very positive feedback from researchers and librarians it has received reflects the extensive consultation with customers carried out in advance to understand what they really wanted from their research tools.

The quality of the Press’s academic books again stood out strongly with over 150 prestigious awards won across a range of subjects and disciplines.

In journal publishing the number of titles published increased to 391 and this year saw the addition of the flagship American Journal of International Law and the announcement of a partnership with the Royal College of Psychiatrists.

In English Language Teaching the Press has continued to build on the ‘Cambridge Advantage’ by deepening collaboration with other Cambridge departments. One of those partnerships led to the Press’s joint venture Write and Improve, which uses machine learning to support students of English by providing automated instant feedback on their written work. 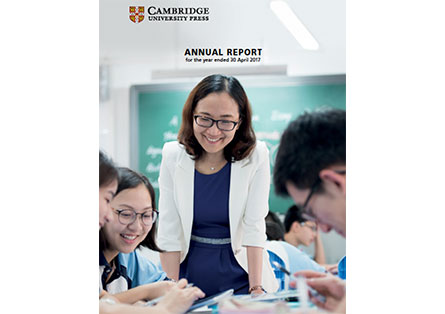 The introduction of new governance arrangements is also helping to deepen links right across the University of Cambridge, including with Cambridge Assessment, the University Library and many of its research and teaching departments.

The Press’s Education group enjoyed a year of very strong growth, particularly amongst schools, following international curricula around the globe. Successes included new wins in Educational Reform contracts with governments in the Middle East and Africa, a further strengthening of its position in key markets such as Australia and India, as well as the opening of new offices in Nigeria and Pakistan.

Chief Executive Peter Phillips said: “Investing heavily in digital solutions and listening ever more closely to our customers – be they researchers, librarians, teachers, students, or our authors – are two of the strategic imperatives that have guided our actions in recent years. All this, coupled with hard work and creative thinking from Press colleagues around the globe, has positioned us for a bright future in the digital age. We are now fitter, faster and more flexible than we have ever been.”

Cambridge University Press is part of the University of Cambridge. It furthers the University's mission by disseminating knowledge in the pursuit of education, learning and research at the highest international levels of excellence. Its extensive peer-reviewed publishing lists comprise 50,000 titles covering academic research and professional development, as well as school-level education and English language teaching. Playing a leading role in today's international marketplace, Cambridge University Press has more than 50 offices around the globe, and it distributes its products to nearly every country in the world.

For further information, go to www.cambridge.org